The culture of selfies is here, but didn't just happen overnight. People have been creating their self-portraits for centuries to immortalize themselves and to fulfill a desire for importance simply out of vanity. Before photography appeared on the mass market in mid XIX century, the portraits were commissioned by wealthy merchants and aristocracy who could afford them. Portraits came in all sizes and shapes with all kinds of props, arrangements, backgrounds, pets, etc. These were painted by artists to show sitter's beauty,  character, position in society or to commemorate their lives.

If you are interested in the history of self- portrait, pick up a book by James Hall titled "Self-portrait: A cultural history".


If the selfie is a portrait of yourself made by yourself in any medium, then I guess Bak, the chief sculptor of Akhenanten was the first one to memorialize himself in 1365 BCE.

He was followed by some Greeks… skipping a few centuries and we get to Marcia. She was one of the first people who actually created her own selfie. She is looking at the mirror while painting her own image, sort of what we do today when we take a photo in a bathroom with a smartphone...

If a selfie is a PHOTO portrait of yourself taken by yourself then Robert Cornelius is the first person who took his own selfie in 1839 and Mr. Nadar is a creator of a spinning selfie….
Today, selfies are a way to present yourself to the world. Facebook pages are infested with selfies and I'm as guilty as a person next to me. We take photos of ourselves everywhere... I mean everywhere, without any regard for the place or event, like a funeral...
or concentration camps...


or in space (which is a good idea but with your sun visor up would be better...) 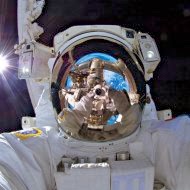 I also find it hilarious that famous historical photos can be turned into selfies. An ad agency Lowe Cape Town produced the series of such photos for a campaign for The Cape Times, South African newspaper. By changing them into selfies, they are incorporated into our contemporary culture. Yet, I suspect that some young ding-dong will assume these photos are real...

Does a photo with a famous artwork transform you?
The answer is "yes" for me. It takes me over, it possesses me even when it is me who wants to possess it. It stays with me for a long time, it influences my life and my art creation, it becomes me…

I found these Real Life Models by Flora Borsi and in a way they exemplify what happens to a person next to a famous artwork even though it wasn't the intent of the Ms. Borsi … She meant to take famous artworks and show what the people would look like if they were real people as you see in below black and white photo of the models of Grant Wood's "American Gothic".

For me as an artist I identify with portraits, and when it comes to the famous portraits… I want to become them. Yasumasa Morikura's portraits exemplify such a desire…. as I did in my own creation of Judith and Holofernus after Cranach.

An on the final note… if art could take a picture of itself… would it?