THE IDEA
I was always in love with Roman Architecture, especially after our trip to Italy. My admiration for modern open living spaces with outdoor garden inside of the house merged with a necessity for self-sustainable and defendable structure and I began to dream about designing and building a house in Roman House Villa Style fitted for the 21 century.

The doomsday phase of stocking up canned goods and prepping house for emergency prompted me to start doing research about the best way to turn the house into a structure that is inaccessible from the outside, yet allows for the sustainability inside for its inhabitants. I decided to go back in history and look at the ancient house of Rome. I also got a good sense of the space by watching famous HBO series "Rome".

Here is an example of typical ancient Roman House

What is appealing in this ancient design, that the building is in a way a fortress with a long tall wall around its perimeter with the entry doors from the front (the shops were usually set up to be entered through separate entrance in the front) and natural light coming from the openings in the roof to Atrium and Peristylium.  The tall wall would allow some light with small windows close to the roof top, but most of the light would come through the center of the house. The outside conditions would determine if the air would be flowing through the house. To make adjustment for colder climates I envisioned sliding glass panels letting the light in but still sealing the home from inside if necessary.

Although my modern Roman house was envisioned as a protective structure for its inhabitants, it was further developed to serve as a simple, yet functional, flexible and aesthetically pleasing space.
The sketch below shows a possible floor layout of the house with 3 bedrooms and 2 baths. It's not to scale. The second floor is not shown but can be added if more space is necessary. 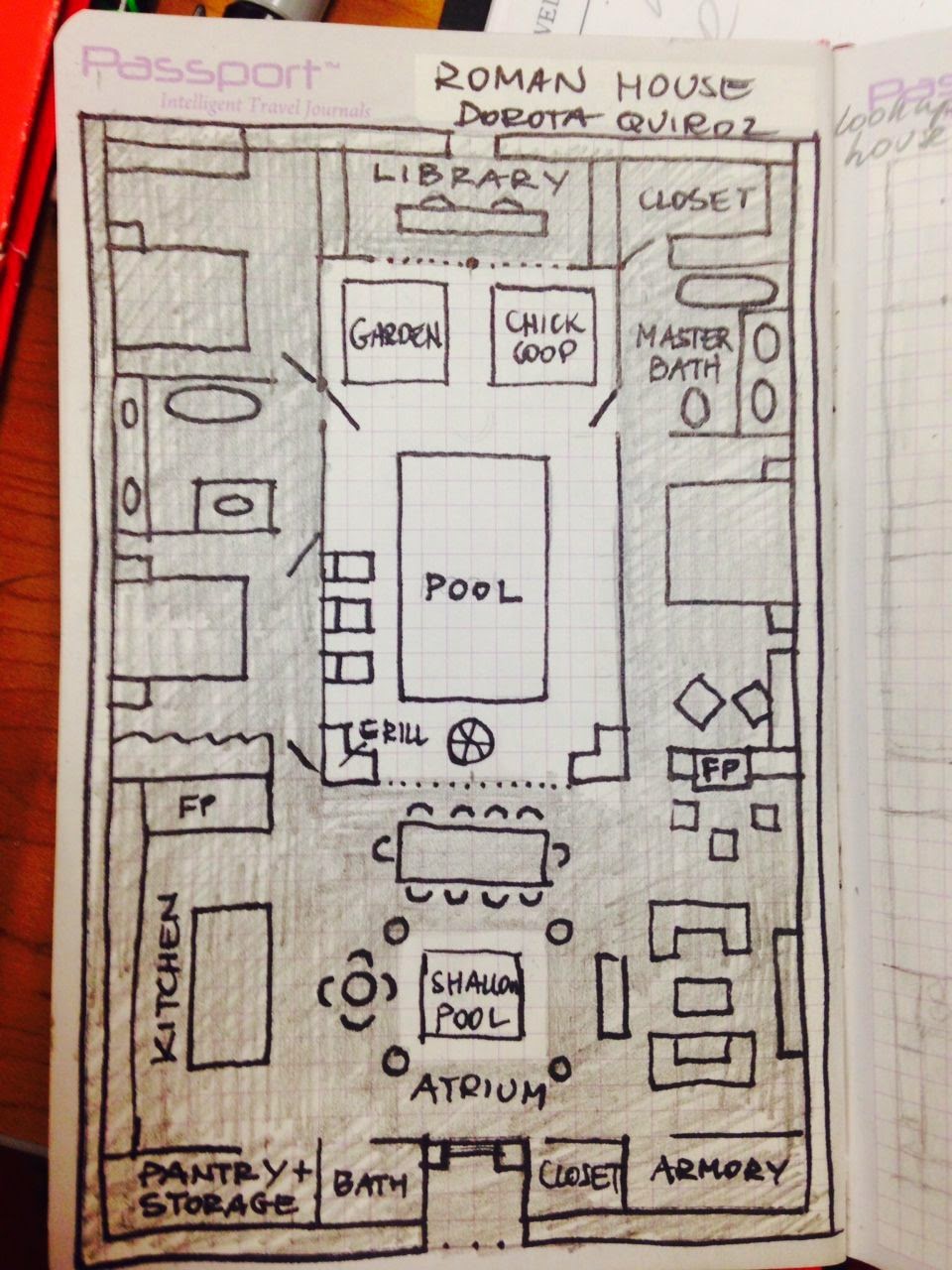 The front of the house is the living space: kitchen with large island on the left, (possible large fire place for cooking), with a shallow pool (impluvium) for drinking water collection directly under a retractable skylight (compulvium) in the center and the living room on the right side. This whole area is tiled except the bedrooms. There is a double-sided fire place in the living room spilling into the master bedroom. The front rooms by the entry would be used as cold storage, food pantry and armory.

Other areas in the house include the library in the back of the house with entry into the garden, master bedroom in the right wing with large walk in closet/master bath while the other bedrooms are on the opposite side of the house sharing a bathroom. The pool area is connected to the garden and there is no roof above either one.

This house was designed to be operational without electricity. The tall walls of the house prevent intrusion. Large reinforced doors in the front of the house plus 1 escape door in the back, prevent from entry through the first floor. The manual retractable skylight allows for gathering of water while raining as well as refill of the pool used for bathing. The well is not shown in a design but could be added in the garden/pool area. The garden in the back can provide source of food and possible chicken coop could be set up in this part of house. The 3 fireplaces would heat up the space as well as be used for cooking. The glass sliding doors and retractable skylight window could be used for ventilation and cooling during summer time.

This idea is very clear in my head but I would like to take it to the next level and find someone who would like to draw it out into real architectural plans, estimates of building costs and feasibility costs. Maybe an architecture student will find it as a challenge and collaborate with me on this project one day, but as of now it's an idea.
Posted by Unknown